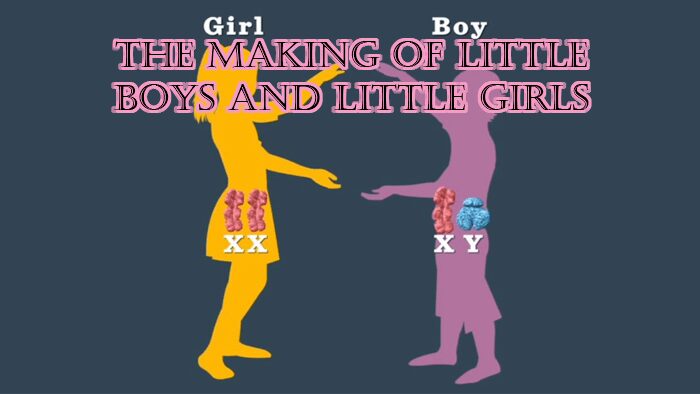 How to have a baby boy and Baby Girl

From a biological and anthropological viewpoint real physical factors create gender-bending in several forms and are natural consequences of certain stressors in our environment. We believe there are real physiological causes behind transgenderism. That does not mean there are never any cases of other causes but there are physical reasons namely caused by hormones that can create not only a mental feeling of being the opposite sex but also real physiological changes.

The study of population control via breeding patterns is called Population Dynamics. The sex hormones, insulin, and cortisol are all involved in the urge to mate as it relates to population dynamics.

Did you know that all fetuses start out as female? At around nine weeks the Y chromosome turns some of the fetuses into boys.

Ways to Guarantee a Baby Boy or Baby Girl

Did you know mothers under stress can turn their boy babies into girl babies in utero? This is not some theory, this is a proven scientific fact. The amount of testosterone in the mother’s uterus can turn a boy baby with XY into a baby girl by affecting hormone receptors and body and brain architecture. The baby girl can be born not XX but XY and still look and act like a girl.

These girls will be assumed to be 100% XX and no one will know or discover the little girl is a little boy genetically until puberty starts and sometimes later in life. Missed periods, because she has no ovaries and uterus, and has a blind vagina with small testicles inside her abdomen. The testosterone from her tiny testes that, at week nine in utero, should have turned the fetuses into a boy went unread by the androgen receptors.

What is happening and why? Stress on the mother whether it is physical, mental, emotional, light or food promotes testosterone and soaks her body in high cortisol. The cortisol makes mom insulin resistant, which mobilizes blood sugar and takes away her 21-hydroxylase. Because mom has very high testosterone saturating her body and her baby, this makes the baby boy’s androgen receptors retreat. This leaves only the estrogen receptors in the little boy’s body working or a form of testosterone resistance. This works in the same way that insulin resistance happens. Too much insulin floods the body, so the body makes the insulin receptors resist attempts of insulin to get blood sugar into the cell.

The first level of stress can cause boys to be homosexual or to feel they were born the wrong sex and are actually females trapped in a man’s body. These boys got enough cortisol and testosterone in utero to make architectural changes in their brains. Being gay or feeling one is the opposite gender makes you an unlikely reproducer. There was a large increase in homosexuality after the stress of World War II. Mothers who were left during the war and were pregnant had to care for themselves at a vulnerable time. Just as career women who delay childbirth until later in life often have already developed some form of metabolic syndrome, high cortisol, and high testosterone.

The second level of stress increases androgen resistance in baby boys and some of them become tall, large breasted women with little or no body hair, many of them go on to become fashion models. These are the XY boy-girls who have no uterus and ovaries but still look 100% female but cannot reproduce. These XY females receive little or no androgens so they are highly estrogenic and seem extremely female.

Both of these scenarios serve the function of cutting back on the population during times of stress. So while you may not be born as an XY looking female, you can very well have had enough cortisol and testosterone saturation to cause brain architectural changes.